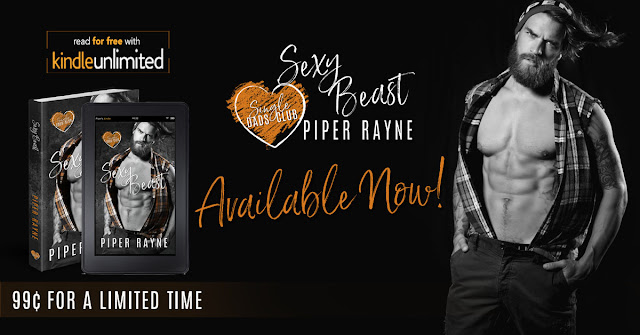 It’s time.
Time to get a life.
Time to start over.
Time to move beyond the past.
The guys in the Single Dads Club would tell you it was time years ago, but until recently, the risk of hurting my little girl outweighed the benefit of getting a piece of ass.
Now that I have a tween daughter on my hands? It’s becoming more apparent with every poster hung on the wall, every fight over wearing make-up and every uncomfortable conversation about puberty, that at least one of us needs a female touch in our lives.
Jesus. I can’t even think the words ‘female touch’ without thinking of her.
Charlotte Rose. Charlie.
She’s everything I shouldn’t want, but someone needs to tell that to my damn libido because every time she’s around I have a constant case of blue balls.
There’s a list of reasons why I shouldn’t give into what I feel—she’s my best friend’s little sister, she’s seen me at my most vulnerable, and the biggest one—she’s the first person in eleven years who has the potential to break me.

Snap a picture and caption it ‘Teenage boy in front of his first Playboy’ because that’s exactly how I feel right now and I’d bet that’s how I look.

Charlie stands in the doorway wearing a white bikini, her nipples hard and erect, begging to be touched. The first thing I notice is the way she doesn't cover up, but opens the door wider, ushering me in with her free hand.

“I expected the pool guy.” Her voice changes pitch and I gather she's as affected by this situation as I am. The only difference is, my arousal can't be hidden.

I stop and tilt my head her way. “Is that even a question?”

“Well,” she walks faster to catch up to me as I use a key to open up the one door that's locked from guests. “Oh, I always wonder what's behind these doors when I rent other people's vacation homes.” She peeks her head over my shoulder and the scent of her perfume makes a beeline for my dick, making it twitch.

As he's begging for an introduction, I squat to get away, but she doesn't relent. Her tits are practically resting on my shoulder.

“Ever heard of personal space?” I remark, grabbing my tool set.

“This isn't half as exciting as I thought it would be.” She finally moves back and I stand with the toolbox in my hands.

“Did you think there would be a dead body?”

She purses her lips and looks up at the ceiling. It's innocent and cute and I'm not sure I ever remember seeing her doing it before. “You know, the owner can't keep it in their own house because they have a preteen daughter, so they keep their stash in the closet and watch it when there are no guests here.”

“Let me guess? I'm the guy with the preteen daughter.”

“You're so smart. I see where Sydney gets it from.” She smiles, a mouthful of straight white teeth.

I nod and walk away. She follows.

“Since I really have no idea what I'm fixing, I don't know yet.” I open the screen door to the hot tub.

I open up the back and start working on it. The little I know about hot tubs might not be enough.

Charlie sits on the edge of the hot tub and puts her feet in, her purple polished toenails dipping in and out of the water.

“I think I deserve a discount if I can't use the hot tub.”

I look up at her and she's smirking.

She’s quiet for a few minutes while I fiddle around trying to figure out the source of the problem.

“I'm curious, Garrett…” she pauses and I glance up at her. “How do my tits look in this bikini?”

*Sigh* If you haven’t read the other two books in the Single Dads Club Series don’t fret, but I recommend you do. If you have then be prepared to be surprised.
We don’t know much about Garrett, but this book will blow your socks off. He’s the brooding alpha male we all love with three killer points going for him;

Add those three together and what’s not to love, right?

Garrett is scared. He lost his wife the day his daughter was born. Is there even a way you can truly recover from that? His daughters a preteen and pulling farther away from him every day and to make matters worse Charlie keeps popping up in his mind. He doesn’t see the little girl who used to follow him wearing pigtails, oh no she’s a grown woman now with curves. The kind of woman naughty dreams are about. Charlie’s everything he wants but too scared to have.

Charlie has always been in love with Garrett. She has watched all his ups and downs from the sidelines and is ready to stand by his side. Charlie gives Garrett a learning curve, far more so then I think I would have been able to, but it didn’t make her appear weak. My favorite thing about Sexy Beast was probably her relationship with his daughter. Sydney and Charlie have a relationship that kind of reminds me of Lorelai and Rory from Gilmore Girls, they are friends yet they have that line, even though Charlie isn’t her birth mother. When Charlie and Garrett have their issues, Charlie is still there for Sydney, and it’s fantastic.

I honestly don’t think I could have asked for a better conclusion for The Single Dads Club Series. You fall in love with these two, watch the other two couples grow, and get a perfect intro for Piper Raynes next series. I was so excited when I saw this hit my kindle, but now I will admit I’m a little sad it’s over. Please, don’t short yourself out and read the series. Fall in love with these three couples like I have. And if you don’t have time for all three books, choose Sexy Beast.


What readers are saying:

"Garrett is the perfect man - hard and virile on the outside and soft and squishy on the inside." - Heather from White Hot Reads
“I am absolutely and positively in love with our bearded sexy beast, Garrett!” – Kristy France, Goodreads Reviewer

If you haven’t met the sexy single dads of Climax Cove yet, now is the perfect time to meet them!

~ Read both for #FREE with #KindleUnlimited ~

Piper Rayne, or Piper and Rayne, whichever you prefer because we’re not one author, we’re two. Yep, you get two USA Today bestselling authors for the price of one. You might be wondering if you know us? Maybe you’ll read our books and figure it out. Maybe you won’t. Does it really matter?

The gang is finally all her and to celebrate, we are giving away a paperback of Real Deal, Dirty Talker, and Sexy Beast along with a camp-themed book cozy to haul them around in!