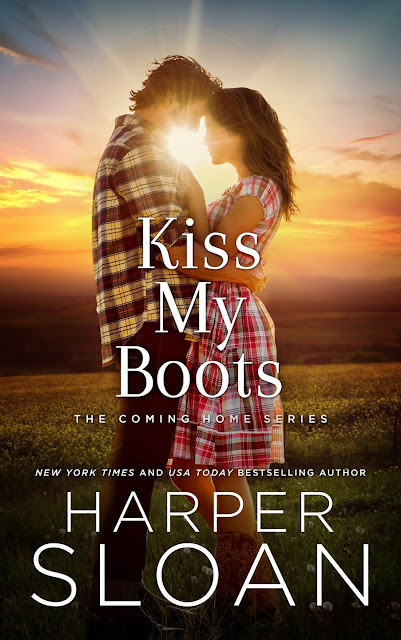 In this second of the sultry, Western-set Coming Home series from New York Times bestselling author Harper Sloan, Quinn Davis might finally have a shot at her own happily-ever-after—but will she let love in, or will she tell it to go ahead and kiss her boots?Quinn Davis prefers to live her life quietly. She’s the stereotypical tomboy with two overprotective big brothers who have always been there to protect her, especially from devilishly handsome cowboys with silver tongues. That is, until Tate Montgomery comes riding into town. Their first meeting, however, is far from something out of a fairy tale and only further convinces Quinn that men aren’t worth her time.The only place Tate Montgomery ever truly felt at home growing up was during the long, sweltering summer months he spent at his Gram and Paw’s farm in Pine Oak, Texas. Now, Tate has returned to his childhood sanctuary seeking a fresh start—but if he’s being entirely honest, he’s not just back for the wranglers and Stetsons. During those summers, Quinn was a friend-turned-young-love who Tate lost when life threw him a curveball and he cut all ties to his past; but all it takes is one glance at the raven-haired beauty he did his best to forget for him to realize just how much he’s been missing….

Tate and Quinn fell for each other during the summers growing up. They started out as friends, who turned to lovers over time, only for them to be torn apart. Quinn has no idea what happened with Tate, it was like he fell off the face of the earth. But one thing was for sure, there was no other person who was meant to be hers then him. So she gave up trying, until she comes across a message from Tate about him needing some work done.
Tate has only ever loved one person, Quinn. He's had to keep his distance for her and others he cares about. Although now he doesn't have to keep his distance, the ties have been cut and he is free to return home and get the girl. He's a doctor she's a mechanic, they may be opposites, but they burn hotter then the sun. Will they finally get the happily ever after they have always wanted with each other?
I usually don't read country romances, but I am so glad I read Kiss My Boots. the conversation was funny, all the characters were on point, I loved the dynamic between Quinn and her brothers, it just hit all the points for me. It wasn't as vulgar as most of the stories I read, but it didn't take away from the story.

Here are a couple quotes that stuck with me;

"It felt like my life was one giant muddin’ trail right after the rain. You know that moment when the divots are the deepest and the mud just reaches up, grabs hold of your tires, and won’t let go? You could spin those sons of bitches for hours and not get any traction. That’s where my life had been."

"I fall asleep dreaming of waterfalls and a home built with pure love that nothing in the whole world could ever tear down. I’d always thought home was a place, but he’s right : our home is right here, in each other’s arms."

Harper is a NEW YORK TIMES, WALL STREET JOURNAL and USA TODAY bestselling author residing in Georgia with her husband and three daughters. She has a borderline unhealthy obsession with books, hibachi, tattoos and Game of Thrones. When she isn't writing you can almost always find her with a book in hand.