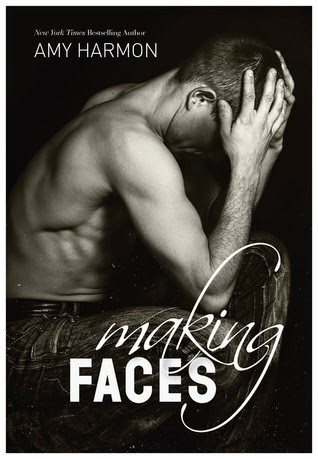 Oh wow! I loved this book so much! What an incredibly beautiful and heartwarming story, that makes me blub through 95% of the book.
This is one of those stories, that a review will never completely show just how good it is. It has to be experienced by reading it. All the overwhelming emotions that can be felt whilst reading this book.
Fern Taylor is a quiet, bookworm. With her fiery red hair, freckles and braces. She hides in the background, doesn't draw attention to herself, and lives for her sappy romance novels. She has a heart of gold and is fiercely loyal to her best friend and cousin, Bailey. He has a disease where his muscles are wearing away and he has to rely on everyone for help, as he is confined to his wheelchair.
Bailey and Fern are inseparable and have been since they were kids. They grew up together and are exactly the same age. In their own ways, they have looked after each other and are each others rocks.
Bailey's dad (Fern's Uncle) is the coach on the school wrestling team. Bailey is obsessed with wrestling but for obvious reasons, can't ever take part.
Cue Ambrose Young, the stunning, model like star of the wrestling team. He is the dream of most girls, with his long, Hercules like hair and ripped body. Everyone wants to be Ambrose Young, he appears to have everything. Fern has been in love with Ambrose for what seems like forever. Ever since he helped her and Bailey out, when they were kids.
Ambrose never really 'sees' Fern, she is so hidden from everyone that she passes him by. Until they end up communicating through notes and letters. Although Ambrose doesn't realise that he is talking to Fern. He thinks it's someone else. Fern takes what she can and falls more in love with Ambrose in his letters. Obviously, when he finds out the truth it doesn't go down well.
As graduation heads up fast, Ambrose decides to enlist. Although he appears to have his life mapped out, as the schools star wrestler with everything, and a bright future. He is a little lost, he feels like he needs to do something. He manages to get his four best friends into enlisting too, as none of the others has any after school plans. So all 5 head off to the army.
Fern stays behind and works nights at the local store. She still wants to be there for Bailey. So she stays in her home town, waiting for Ambrose to come home. Whilst she continues to love her books, and now she is also writing her own love stories.
That is about as far as i can go. It's at this point that things take a few different turns, and some really heart wrenching events start to play out. I'm not one for spoilers, and think this needs to be experienced first hand.
All I can say is, wow! From the very first page through till the last. It was amazing. Beautiful writing that captivates and sucks you in. Incredible characters, that never fail to surprise and leave me in awe. An overwhelming message, that just makes you stop and think about everything in your life. Make you re-evaluate your everyday moans and groans. Just leaving you with a feeling of having your heart squeezed, extra hard.
Making Faces, is an incredibly beautiful tale of friendship, love and loss. That sticks with you forever.
5 stars.
Posted by Louise Seraphim Reviews at 9:02 AM