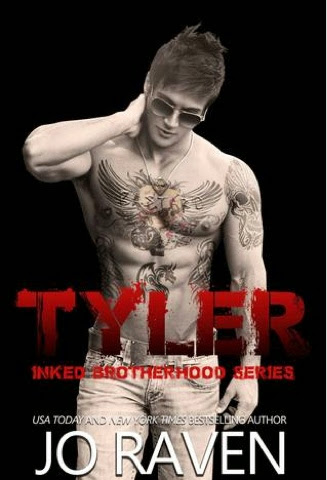 **I was given an ARC of this book, in exchange for a fair and honest review**

WOW! Just wow! Well okay maybe a few words more. ;)
First we had Asher, troubled and fierce. Gorgeous but broken. Literally fighting his way through each day. Audrey was his everything, she rescued him and gave him hope. I loved their story and the world that author Jo Raven created with all her addictive characters. Each and everyone has had their fair share of trouble and heartache in one form or another. Little by little we are learning more about each one and how they stuck by each other through everything.
This time it is Tyler's story. The older brother of Asher. We had learnt through Asher, that Tyler had left home and never looked back 4 years ago. Nobody knew why, or where he had gone. Not only had he walked away from Asher, he had also left behind Erin, his first love. They had shared everything together, but had a huge fight. Erin told him to go and she never wanted to see him again. So he went. Yet she said all this for a reason.
Erin hasn't moved on. Her life had to continue, but she never forgot Tyler. He was her first love and left her. She has never been able to forget him.
When Tyler returns back to his home town, following the death of his father. He has a lot of bridges to build. Both Asher and Erin are still angry and hurt over his disappearance 4 years earlier. Tyler wants to make it up to both of them. He wants his brother back, and feels guilty for the way he left him. He still feels exactly the same way about Erin as he did years before. He's determined to make it up to both of them. Yet he has a lot of extra baggage and trouble plaguing him now, and it's making everything a lot harder to deal with.
Again, the characters are incredible. Jo Raven, has this way of making them all so captivating. They are raw and edgy, gorgeous yet hurting. There is always secrets, all her characters have secrets. They usually surprise the hell out of me too, but I love surprises in books. I still love how through the 'Inked Brotherhood' these guys all look out for each other. Although they all have their fair share of problems and struggle with so much, they always have time for each other. Coming to each other's rescue time and time again.
There was a lot of aspects of this book, that actually taught me a lot. Things I never really knew much about, they were explained and shown at their worst and most brutal. It made me sad but far more aware of things.
So another fabulous ending and yes, at one point I was welling up. :)
Tyler and Erin's story was amazing, and just made me a huge fan of this series and of author Jo Raven. I can't wait for the next book in the series, the one I have been waiting for, Zane. The inked up tattooist with the biggest heart and the foulest mouth.


A fantastic 5 stars!
Posted by Louise Seraphim Reviews at 8:16 AM