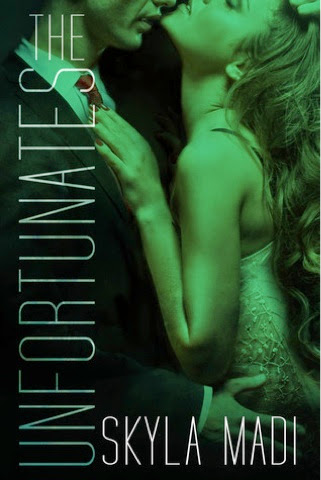 Oh my gawd!! That was incredible!
Okay, so before I rant on about how amazing this book is, I'll just give a bit of background.
The Unfortunates is set in the future, time has swiftly moved on and the world that now exists is cruel and controlled. After crazy wars that have wiped out nearly all human life on earth, Amongst those remaining are four strangers who come together and rebuild society. Eventually they decide, they deserve some recognition and gratitude for their part in rebuilding the society that is now flourishing. They wanted everyone to have a place, and for them to be above them all, reaping the benefits of their hard work. Out of this came the four founding houses, who would rule. With a selection of their closest friends, they would be called the Fortunates, everyone else would be the Unfortunates, basically the lower class. Which eventually would lead to them all being slaves and having no life of their own.
The system was twisted and cruel for the Unfortunates, and opulent and privileged for the Fortunates. Yet for some reason it seemed to stick.
On to our main character, Nine. The story starts on her 18th birthday and the day she is selected to become an Unfortunate that serves one of the four houses. Either as a personal Unfortunate; a gift to a Fortunate, to do with as they pleased. Or an Unfortunate who worked in the house and grounds, a general slave really. From when they are born up to the age of 18, the Unfortunates are in a cross between an orphanage and a work house. They barely talk to each other and have no privileges, rules and lessons are ground in to them, preparing them for life as an Unfortunate and how to keep the Fortunates happy and satisfied.
So, Nine (the number given to her as an Unfortunate, now her name) is chosen as a gift for the son of the Sario house.

'We're told the Sarios are the most brutal, the most unsympathetic, hard to handle family of them all. If that's true, I might just entertain the idea of suicide if I'm chosen to live there.'

Possibly, the worst house that she could of been placed in. She is now the eldest son Kade's, personal Unfortunate. Which means she is his property and possession to do with, exactly how he chooses. She is really his slave, in all sense of the word. Maybe she got the long straw, maybe she got the short. Kade Sario is 25, darkly gorgeous, brooding and a formidable Master to have. On first impressions, he is going to be hard, deadly and dangerous to get on the wrong side of, perhaps he still is by the end. Without giving anything away, it's hard to tell Kade's motives. I'm torn between thinking I have him sussed, then he will do something and I'm stunned by his actions and have no clue again. One thing I will say, he is stubborn. Fortunates have such a role to play and ideal to live up to, just like the Unfortunates. For some of them, it comes easy, within their blood to rule with an iron fist and make sure everyone knows their place and who they are. Yet for others, they are playing the part they were born in to. It doesn't matter what is right or wrong in that world, you follow the rules in your place. Kade, is the latter. He knows who he is and what is expected of him, yet he struggles with conscience. Sometimes he can ignore it and keep the mask on, other times he can't. His new Fortunate is a distraction when he doesn't need or want one. He has to keep his eye on the ball, he will be next in line to run the Sario house and business and power come first. Although Nine, isn't wanted or needed by Kade, she soon proves to get under his skin. Not only is she stunning and stands out from other Unfortunates, she acts nothing like one either. She is feisty and chances her luck time and time again. He doesn't want to use her for himself but he will not allow others to have her either.

"Possession?" He stands up and quickly fingers the buttons to his shirt, exposing a sliver of his bare chest with every single one. "Yes, you are mine. You wear my crest. I own you."

The tension between Kade and Nine is sizzling and electric, right from their very first meeting. One of the most amazing things about his book, is the fact that nothing was instant. Except the attraction of course. Yet, it was dragged out until I was dying of frustration just reading it. There was no insta-sex, nothing was too much or too soon. It was perfectly dragged out so that the reader is dying each time they come close to each other. Just from a small touch. It was excellent. Prolonging the inevitable but increasing the desire for it to happen. The relationship between them was incredible. She pushed just enough to test him, to keep him on his toes and stop him from going soft. He always kept that edge to him, that made him dangerous and unpredictable. I couldn't fault the characters at all.
The overall opinion of mine on this book is, quite hard to describe just how amazing I found it. Of course I'll try. ;) I had never read anything like this before. I had read some dystopian and stacks of erotic romance/erotica. Putting them both together for me was a new toy, I had to experience it, not knowing whether I would like it or not but I was intrigued by the synopsis. I'm so glad I did. It's been the greatest surprise for me in ages. Nothing boring or repetitive, re-used storylines or common main characters. It was all new, fresh and totally addictive. The only problem now is waiting for the next book. The ending was quite a shocker, in a good way but left me screaming to have more. Skyla Madi is a new author to me, but since reading this I'm totally hooked by her writing style and captivating characters. I'll have to go read her other books while I impatiently wait for the next book in this series. :)

**I was given an ARC of this book, in exchange for a fair and honest review**
Posted by Louise Seraphim Reviews at 7:22 PM