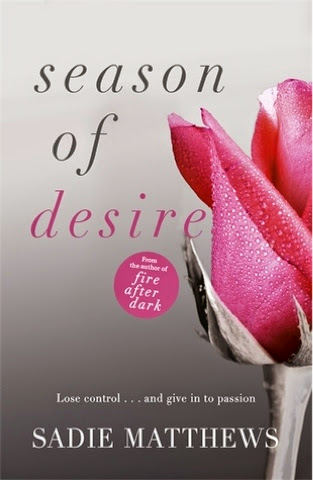 This is my first Sadie Matthews book. I have wanted to read her After Dark series for quite some time, but hadn't got around to it as yet. I had heard really good things about it, so was really excited to have won this first part in her latest series.
Freya Hammond comes from an extremely wealthy family. She is beautiful, spoilt and used to everyone jumping at her every whim and command.
Miles Murray is her assigned bodyguard. He is ex-SAS and obviously good at his job. Yet, he is not happy at having to follow the crazy orders of a spoilt, rich girl. Especially when he is ordered to drive through dangerous conditions, to get Freya to the airport on time.
After he loses control of the car on the mountain lanes in the snow and ice. The car plummets off the side of a mountain. Through some stroke of luck they manage to escape countless, near misses and fate seems to be in their favour, as they find a shepherds hut in the middle of nowhere.
So starts a couple of days of being stranded in this tiny cottage in freezing temperatures, with only each other for company. After some horrid arguments, it's obvious there is a lot of tension between them. Some of it is quite heated. It's obvious they are going to act on the attraction between them. So begins a kind of odd yet very hot arrangement between the two of them. An arrangement that is only for while hey are stuck in the hut. Once they are rescued, if they are rescued. Life will resume as normal. It doesn't take long for them to realise the arrangement works amazingly well for them.
So after a couple of days, they are rescued and brought back to real life. Yet, the real hard work and survival techniques come in to play now. It's quite intense when they are back, wondering what they will do. I won't spoil it by detailing it any further. What I will say is, It was fantastic!
I started off disliking Freja immensely. She was childish and juvenile. Her whole attitude didn't seem real. It was so spoilt and rude, it was cringeworthy. Yet it only took a few chapters and she seemed to settle down. By half way through the book, I really liked her. She had quite a nasty past event, that may explain some of why she was, the way she was.
Miles was also hard to read. Playing his bodyguard role perfectly, yet when another side of his come out, that was a very pleasant surprise. By the end, he was perfect leading man material!!
The final third of the book took a different turn altogether, the pace was faster and the story line was really intense and gripping. I really started to become hooked to every word by then. The ending was perfect, but I didn't want it to stop, I felt like it needed to continue. I know that there is another book after this one, but it's Freja's younger sister Flora's story. I think some of what was left from this one is intermingled with Flora's story from what I can tell.


So, loved this book. Great writing and totally new and intriguing story. Can't wait for book 2 and I'm off to find more by this author.
4 Stars.
Posted by Louise Seraphim Reviews at 3:43 AM