We first met Lauren in Rockstar’s Temptation, where she wasn’t the best sister to Maisy and tried to come between her and the man she loved.

Lauren doesn’t know why she is such a bitch, but she is. She believes in being who you are and fuck those who don’t like it. Her ex is pissed, and she soon realises the hard way that she never should have betrayed him. Yet, pretty-boy Andrew isn’t as innocent as she thought. In fact, it turns out he’s connected to one of the biggest gangs in America.

Lauren is beaten and abused in every way possible. Her human rights are stripped, and she is treated like an animal. Blindfolded and gagged, Lauren has no idea what is going to become of her, or if she will ever get out of the mess she has found herself in.

Karma has finally caught up with Lauren Ashford, but is this the end, or can someone out there help her? Are there men strong enough, or even brave enough, to face up to her captors?
When the Philadelphia Kings of Rebellion charter come crashing into her kidnappers’ motorcycle club's cabin, they find a beautiful girl chained up to a wall and made to live like a dog on the hard floor.

From here, Lauren is given the greatest gift. To go home. Once back in the UK, Lauren is under the protection of the UK Kings of Rebellion MC and is shocked to find that even though they are dangerous, they treat her so much better. Here she meets Grim, the oldest son of the president. He’s covered in tattoos, drives a bike, likes to dress in leather and loves to protect her. Is this the man that Lauren needs? Or do her old habits of being a “do now, think later” kind of bitch, come back to bite her in the ass?

One thing is for certain, Demon, the president of the motorcycle club who took her, wants her back..

Karma is an MC book that is unique to anything I have read before. The author pushes boundaries by including some material that is hard to read about for a reader, but important to the overall plot of the book. This is a warning to anyone who has any triggers or cannot handle graphic details of horrific events, this book might not be for you. With that being said, I absolutely loved this book.

Karma is a wonderful book about transformation, desperation, and recovering from traumatic situations. The author used several chapters to set up the background of the story and really set the tone for the book. Halfway through, an event occurs that changes the tempo of the book and catapults the reader into a whole other world. I think that the author did a good job at comparing and contrasting two different MCs and showing that you cannot judge one whole group of people by one bad experience with another that might look the same.

I could not put this book down! It drew me in from the beginning. Even after some of the tougher scenes were played out, I was still frantically swiping my phone (flipping pages) desperate to see what happened next. This book is full of action! I also loved the sweet touching scenes within the book. While some parts were horrific, these sweet scenes showed the reader that while there is a bad storm, there is always some small light to help you get through it.

There are a couple of things that bothered me about this book. The first is I think Lauren's character developed too quickly. I also thought Grim’s mom name was too similar to Lauren's name as her name was Laura and that caused me confusion at times. I also thought the alternative POVs started later than I would have liked in the book. I understand why it started in the middle of the book, but I would have liked to see it as soon as this character was introduced into the story rather than chapters later. I also felt that at times the club made bad decisions that were not realistic. Although bad decisions are sometimes made, I felt that a true MC would’ve handled a certain situation different.

Overall, Karma is an amazing book. Not only did the author do an amazing job by describing the book in a way that I could picture in my head, she also did it in a way that was respectful and showed that humanity is not completely lost. I give this book 5 stars and will be recommending to my friends and family. Can’t wait for the next book! 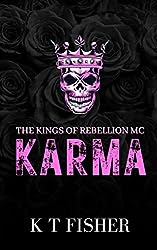