Re•sent•mentThe act of hating – no, fucking loathing Dean Collins.
(Yes, I’m well aware that’s not the actual definition, but it might as well be . . .)It’s been ten years since we've seen each other and the feelings are still as strong.I’m not going to bore you with all the details of how our love was once intoxicating, consuming, and perfect.Because it was . . . until it wasn't.I've been fine without him. I haven’t missed his cruelty, his coldness and his spite. And after the ugliest breakup in the history of breakups, I forced myself to move on. Year by year, the feelings I had for him slowly drifted away, but one encounter with him recently changed everything. One encounter made me realize how the heart doesn't forget shit, and how my mind is going to have to work overtime to make sure I never forget my definition of resentment.

Resentment is a story that is told over a long period of time. It's not your typical romance novel. Author Nicole London did an amazing job when she was writing this story. The plot was written beautifully and I really loved all the twists that were thrown in. This book was not at all what I was expecting. With that being said, I am delightfully surprised.

Resentment starts out with the main character being in high school. Most the book is told from Mia's point of view. Mia is the socially awkward teenage girl who is only focused on her future. She's had a really tough life at home and is just counting down the days until she gets out of high school and goes to college. She wants nothing to do with the popular crowd. Then she starts to get to know Dean, the quarterback of the football team and Mr. popular himself. Just by meeting him her whole life was changed.

The first quarter of this book outlines Mia and Dean's interactions with each other while they were still in high school. For a while there I wasn't a sure how I felt about this as the description made the book seem a little bit different, but after getting further into the book, I realized how detrimental this was to the story. Without having this background information, I don't I think the rest of the story would've been as interesting as it was. I love the writing style on this book in the way that the author decided to lay the book out.What I like most about this book is that the first half could be a young adult book. It matches the time period in which the main character is in. She's a teenager and is told from a teenager's point of view so it made sense that the book had a young adult feel to it and that the writing mirrored what a young adult might think or say. Then as we got inside the adult life, we were able to see a big difference which shows that she has grown and that she's now an adult.The only negative thing that I can say about this book is that later in the book we get to read scenes from the teenage years from Dean's point of view. I think this could've been written a little bit better as I thought there were a lot of repeating of the same words and not really adding anything new to the story. With that being said, I think we get a very good glimpse into why he acted the way he did when they were teenagers and why he still is acting the way he does now. I think it's always important to get into both characters heads because you get to see where they're at and how they're feeling. We're always told the people perceive things differently, but we don't really realize it until we can get inside another person and truly see how other enter bring the same situation that we may interpret differently.Overall, I really like this book. Honestly the only thing that I didn't like about the book isn't even that big of a deal. It didn't take away from the book for me, just made it be a little bit repetitive for a chapter. With that being said I would recommend this book to my friends and family and anybody else that asked for a book recommendation. Good job Nicole London for writing an amazing book!

"You know, I did come here for something." He steps into the room and close the door. "But, now that you claim that you're accepting applications for your club, can I fill one out? ""We don't accept douchebags," I say flatly. "Your application wouldn't make it past round one."
- Mia and Dean, Resentment"Why are you standing there with your hand over your heart like that, Mia?" My mother walks into the foyer. "Have I unknowingly installed in American flag in the hallway? Are you pledging allegiance?"
- Mia's mom, Resentment"I'll wait for Eric to come," I say, hating that my body is reacting to his touch. "I'm not interested in being arrested right now."- Mia, Resentment 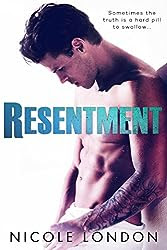 Posted by Anonymous at 9:55 AM