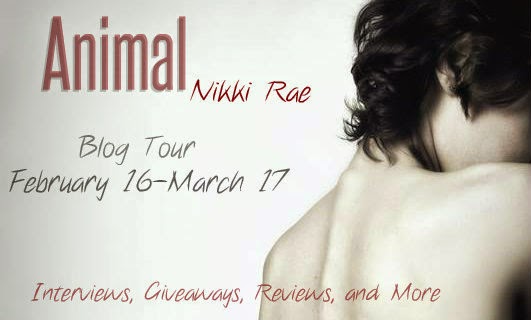 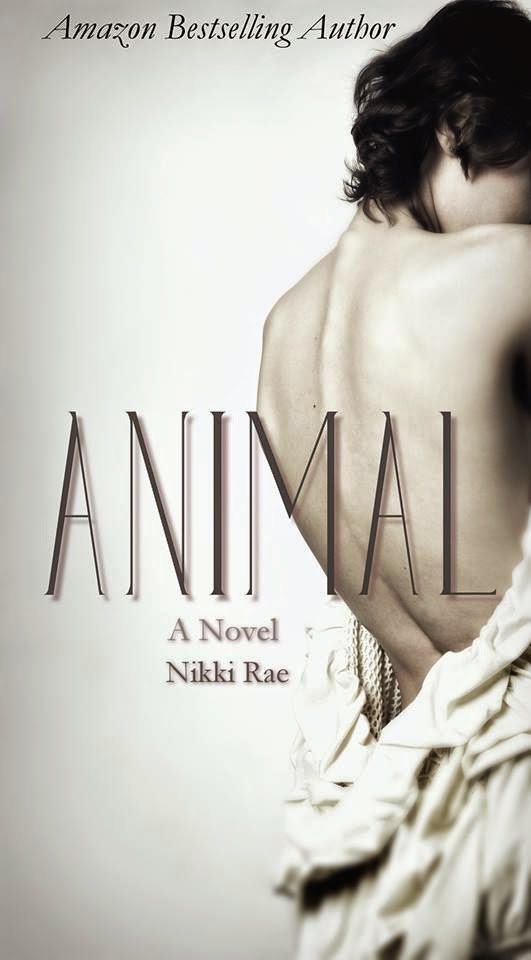 Ava has spent her life running from the monsters that lurk in the shadows, always the prey. She finally thinks she can settle down, have a normal life, and work on not being so scared of the world around her. That is until she runs into her worst fear.
He has finally found the potential family he has always wanted. All he has to do is make his little bird sing. Will Ava escape with her humanity intact? 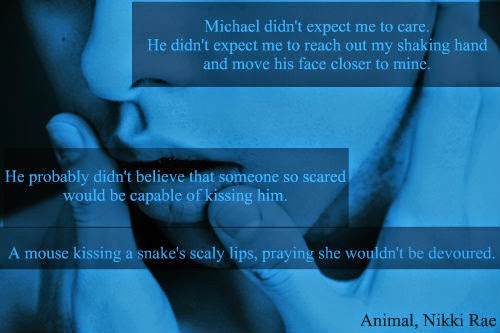 Oh wow! I'm still quite stunned by this story.
It was dark, yet in a really weird way, quite beautiful. That's a bizarre explanation, I know. I'll explain more.
Animal is a paranormal book, but it's also quite dark, and very deep and can mess with your mind a little. The best kind of book, in my opinion. Plus if your a hopeless romantic, you can also see elements of something building there.
Ava, has never had the easiest of lives. After a traumatic event took her parents, when she was young, it has affected her life in many ways.
Now there is just her and her cousin Toni. They move from place to place, never stopping in one place for long. Ava always keeps one thing consistent. She has to work with animals, she is like an all round animal whisperer, and connects to them, where she perhaps doesn't connect to many people. So we start the story with a new place, a new pet store, another chapter in Ava's life.
Ava is on her own at the start, as Toni hasn't followed on to the new place yet. Things start off well, but Ava still has her episodes and darkness takes over. She struggles with many bi-products of her traumatic past, but has ways of dealing with the episodes and has to rely on these exercises, to get her through the tough times when she is on her own.

I was afraid that my breathing was going to take over my body, and that was always bad. I could never stop an attack once that happened.

Ava starts to hear a cat crying, every night. Around the same time each night. It wakes her from her nightmares, and confuses her. But she knows she can hear it, and feels a pull to go and check on it. She goes through this every night for a while, until one night, she actually goes out to check, that's when her whole life changes.

I couldn't see anything.
There was fabric over my eyes. Something was digging into my wrists and my legs were wet. Cold. I must have fallen to the ground. But that couldn't be right. I was standing on my feet now, hands on either side of me, dragging me in one direction.

I'm not going to go on and summarise what happens, once Ava leaves to check on the cat. From there on, things take a really dark turn, but it remains incredibly gripping. But it's a story that shouldn't be spoiled by information before hand.
We get to understand what is going on. through quite a few characters. The pov's go between Ava, Michael, Evan, even a few from Miles, and Toni. Which actually makes it quite easy to understand what is going on from all angles.
The sheer strength of Ava, is what kept shining through the story. You would think, from the outside, that everything is pretty hopeless for Ava. Most in her position would give up. Yet she doesn't. She does what she has to, even when she can't think straight, her strength keeps her going, and fighting. She has a plan, and won't give up. Although I felt sorry for her, I admired her more. I don't think I could be as strong as her, in her position. It was pretty scary!!

I couldn't be the prey. This was my game. My rules. I just had to figure them out before things went too far. If they hadn't already.

Animal tells the story of Ava, Michael and Evan. They were characters who first appeared in Nikki Rae's first series, The Sunshine Series. Although you don't need to have read The Sunshine series beforehand. I felt that my knowledge of these characters not only helped understand, but also gave the story more background.
All three of these characters show up in The Sunshine Series, many times, yet they aren't main characters, just background. But, what I will say is, after finishing Animal, I badly want to go re-read the other books, to remind myself of little details, and what happened to the characters after the Animal time line finished. I kind of wished I had read Animal first, then moved on to The Sunshine series afterwards. But whichever way you read them, they are all incredible and unique.
I think, besides the amazing story, the important thing that shines through, would be the captivating writing. This story could not of been what it was, without the beautiful way in which it was told. It was haunting, and sometimes unbelievably sad, but I could picture every little detail like it was drawn in colours and photos, not just written. Which is why I think I see it as a beautiful story. Yes, that sounded a bit strange I know, it's hard to explain. It left lingering thoughts for a long time after I finished. I actually wanted it to continue, to know what happened afterwards. It's most definitely a must read!!! 5 stupidly big stars!

"The bird flew away."
I couldn't help the sense of calm that washed over me at the words. We both knew what they meant, but we didn't have to say anything.
"Ready for what's next?" he asked eagerly.
"Yes," I said, thought I knew I probably wasn't.

Posted by Louise Seraphim Reviews at 5:03 AM