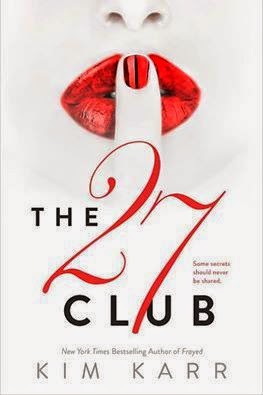 Well, like most people who read the blurb of this book, I was beyond excited and intrigued. It was like nothing I had read before. I'll pop in the blurb, just encase you're wondering what all the fuss is about.

You don’t know when…
You don’t get to choose if…
When it’s time to join…you’ll know.

You might think you want to be a member—but trust me this is one club you don’t want to join. It’s not a place where people go to live out their deepest, darkest sexual desires—there are no handcuffs or blindfolds.

The 27 Club only admits those who die young and tragically. My brother was recently bestowed membership and joined many of our ancestors before him. I know I’m next. This is my destiny, and I was ready to yield.

But then I met Nate. He awakened a sensuality in me that had never been explored, never satisfied. I knew then I could no longer accept my destiny. Nate’s presence controls me. I’m overwhelmed by his touch, his words; my every thought is consumed by desire. I believe he was brought into my life for a reason.

And if there’s a way to cheat it—I must.

So yeah, intriguing huh? Well, I started the book, and it wasn't giving a lot away to start with. It began with Zach or 'Z' going out for his 27th birthday with his best friend, Nate. They are going to an exclusive club, and Z is determined to have as much fun as possible, because as far as he is concerned, you never know what could happen.

We then jump to Zoey, Zach's sister. They have always been incredibly close and only 9 months apart in age. Zoey is suffering hard after Zach has passed away, she knows she needs to pick herself up, and move on with her life, but she is struggling.

Zoey finally manages to work up the courage, to fly out to Miami, to see where Zach lived before he passed away, also to try and find out what happened to him, but she hasn't got long. It could be her next.
It's here that she meets Nate, Zach's best friend. He lived next door to Zach and is going to help Zoey sort through his things, and show her some of Zach's favourite places. But Nate ends up awakening something in Zoey, a desire to live, and to want new things, the things she has never allowed herself before. Yet, there is a lot of rules and maybe some secrets too.

It's incredibly tricky to summarise this book, what I said above is really rather vague I'm sure, as everything I could say about this book is a potential spoiler. It is far more detailed, and involved than I could possibly hint at.
What I will say is, the story is really clever, and it's full of suspense. Lots of big reveals, and hidden secrets. I love all that in a story, it sets my mind off, trying to unravel it all before the story reveals it.
I did think though, there was quite a few times, where I did expect a little more from a particular story line. I won't say what those particular threads were in the story, as they were key points, although I wasn't disappointed in where the story went. It did have potential to be so much more grittier and darker, but it's like the opportunity was missed. I think it's because the blurb had me thinking all kinds of crazy thoughts and possibilities, and the first half of the book felt like it was leading up to something huge.

Despite that, I still immensely enjoyed the story and it's originality. The writing style was something I couldn't fault, it was incredibly easy to read and enjoy. Made so much more enjoyable by the beautiful visions that author Kim Karr painted.

The characters were easy to follow and love. Zoey was incredibly vulnerable, with her fears hovering over her head, yet she became amazingly strong. And Nate, well wow, Nate was a potential runner for a top 2015 book hottie boyf! He was incredibly alpha and gorgeous, he even had qualities which made him a definite winner for me, but I can't mention what those qualities are, as they are part of a storyline. But, wow he was hotter than hot!!!
Again, loved this book. I really enjoyed reading something new and unique.
4 stars.