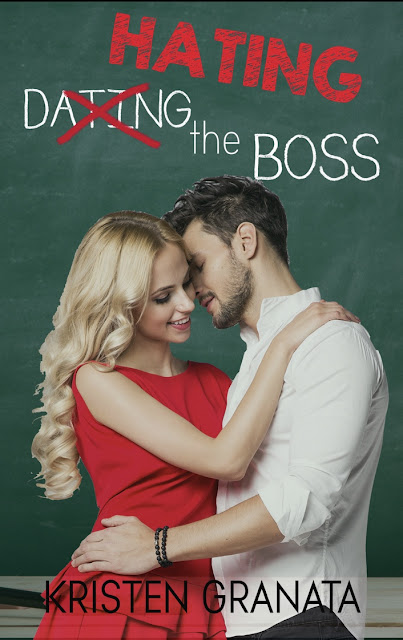 One night.
That’s all it was supposed to be.
Imagine my surprise when Mr. Sexy in a Suit breezed through the door on the first day of school.
Ladies and gentlemen, meet my new boss.
Not only does he instantly recognize me, but he accuses me of stealing something valuable from him the morning I walk-of-shamed out of his apartment.
When bullying me into a confession doesn’t work, he turns my life into a living nightmare – as if that will coax me into returning what I supposedly stole.
But this is my school, and the only thing I’ll be returning is payback.
Game. On.
There’s only one problem. I wanted him before I hated him, and even now, a part of me still wants him. Somehow, through all of our fighting, through the anger and the pranks, I think I’m falling in love with the enemy.

Louise's Review
Hating the Boss is a standalone light hearted Rom-com that caught my attention from the start; adulting thrown out the window I read this book in 1 sitting.

Heading out the bar and celebrating her divorce was the last thing Raegan wanted to do, especially when there were balloons were involved. Jaxon was out celebrating too, a big promotion and taking Raegan home was the best reward; except when a family heirloom disappears.

Raegan and Jaxon meet again in a very unexpected way and when fingers are pointed, their pranks step up a whole new level.

When the dust settles and truth comes out, will there be a chance for them?

Granata is a new to me author and I couldn’t resist when I read the blurb; I personally enjoyed reading this book and nothing beats a well-done Rom-Com. I look forward to reading more from Granata in the future.

Author Bio:
Kristen Granata is a teacher by day, and an (exhausted) author by night. Known for writing emotional New Adult Romance, she loves creating realistic, flawed characters who struggle through the darkest parts of life and come out stronger on the other side. Kristen is a self-proclaimed "bitter cynic trapped in a hopeless romantic's body." Her characters pack a sarcastic punch, make you laugh, make you think, make you ugly cry - and they will always live happily ever after. If you're a lover of moving, inspirational reads, Kristen's your girl.

Kristen was born in Brooklyn, New York in 1986. She moved to Staten Island with her family and lived there for almost twenty years. There she attended community college and became a teacher. Despite her passion for writing, and despite her professors strongly suggesting she become a writer, she took the more sensible route (bitter cynic, remember?) After going through a difficult divorce when she was only twenty-nine, Kristen returned to writing. The raw story that poured out of her led her to publish her debut novel, Collision, in March of 2018. Soon after in August 2018, the sequel, Avoidance, was published. Her third novel, The Other Brother, released in April 2019.