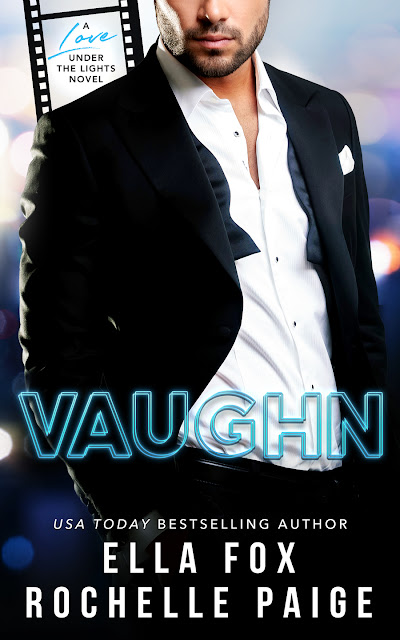 Gorgeous, charming, and funny, Vaughn Corbett rose far above his less than optimal beginning to become a household name. Known for being a dynamic and unflappable interviewer, no one was more surprised than he when he got tongue-tied over a gorgeous blonde in the middle of a live interview.


Allie Henderson was so focused on her career that she rarely thought about men or dating. That all changed when she came across a silver-tongued devil on the red carpet. The moment his deep blue eyes met hers, something inside her shifted.
Allie was there to support her best friend. Vaughn was just doing his job. Neither of them expected the instant, magnetic attraction that couldn’t be denied.
Would a surprise that neither of them planned on end things before they really began?

Will be free in Kindle Unlimited soon

EXCERPT
The second I saw the sexy as fuck blonde in the green dress, everything shifted. When our eyes met, I was poleaxed. An intensely possessive feeling roared to life inside me. The need to touch and claim her was so extreme that I struggled not to drop my mic and go right to her.
I was known for being a dynamic and unflappable interviewer, yet for the first time in my career, I fumbled for words and struggled for coherence. This was due to the fact that the only thing I cared about was her. Only when I realized that my segment producer had been frantically waving at me from his spot next to the stationary camera did I remember that I had a job to do.
Forcing myself into host mode, I somehow went about interviewing the group of people the girl in the green dress was walking with. I knew who each one of them was, but her name was a mystery because she stood off to the side, and it wasn’t like I could call her over.
The rules on the red carpet were simple and definitive. Talk to the talent and keep it moving. Assistants, friends, and family members didn’t get a lot of play, even if they were as sexy as the goddess in the green dress. It frustrated me not to know her name, but I comforted myself with the knowledge that it would only be a matter of time before I solved that mystery.
After I wrapped up my pre-show hosting duties, something that took far longer than one would imagine, I headed into the Dolby Theatre. I was seated with one of my good friends, Liam Hall. He wasn’t nominated but was presenting, so he was in a chill mood. Typically, we’d have shot the shit and pressed the flesh with the people around us, but I was so busy staring at the girl in the green dress that I didn’t have it in me to do much more than phone it in. I was smart enough to train my eyes mostly on the stage when the cameras were rolling, but every time the host threw to commercial, my attention went right back to her. I hated that she was seated so damn far away in another section.
Oscar ceremonies were known for being ridiculously long and what was scheduled as a three-hour broadcast always went over. Sometimes by seventeen minutes, and sometimes by eighty. I’d never hated the length more than I did then. I silently willed the damn show to come in on time for once, but naturally, that didn’t happen. The fucking thing dragged on longer than War and Peace.
During one of the commercial breaks, Liam leaned over and muttered, “What’s the deal with the sexy chick in the green dress you’re busy eye-stalking?”
While it was true that I was ogling her—clearly not as covertly as I’d hoped—hearing Liam refer to her as sexy set my teeth on edge. That I had any kind of reaction to his question was unusual. I’d had a similar response when I’d seen Dane Garrison take her arm earlier. The only thing that calmed me down about that was the certainty that Dane wasn’t dating her. I knew this because Dane and I were tight. The only girls in his life on the regular were his mom, Gloria Garrison, and his daughter, Maggie. Thank fuck I’d remembered that before I made a fool of myself by telling him to get his goddamn hands off the blonde. I’d never felt territorial about anyone before, but there was no denying that I wanted—needed—her to be mine. That brought me back to Liam, who needed to know that the goddess in green was majorly off-limits.
“Call her sexy again, and we’re going to have a problem,” I grumbled, speaking low enough so only he could hear me.
Sitting back, Liam raised his brows and gave me an “are you serious” look. I dipped my head to acknowledge that yeah, I sure as fuck was. Unbothered by his obvious amusement about what was going on with me, I turned my attention back to the woman in green.
ALSO AVAILABLE
#1 Gage
US: https://amzn.to/329TUlb
UK: https://amzn.to/323QiRu
CA: https://amzn.to/2NGtdRf
AU: https://amzn.to/2LpCMBl 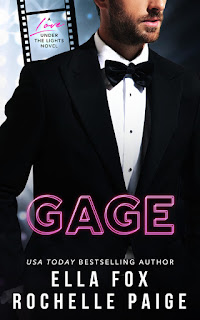 Free in Kindle Unlimited
AUTHOR BIOS & LINKS
Ella Fox
USA Today Bestselling Author Ella Fox has learned a bunch of stuff along the way but the most important of all those things is that anything is possible when you try. In 2012 she took a big leap of faith and published her first book, Broken Hart. Since then she’s written fifteen more full-length books and several novellas– and every one is a reminder that you can live your dream as long as you work for it.
Ella’s favorite things are music, movies, traveling, The Foo Fighters and, of course, reading. This isn’t a surprise considering the fact that her mom is USA Today Bestselling Author Suzanne Halliday.
Website: http://www.authorellafox.com
Amazon: https://amzn.to/2oTMJvU
Bookbub: https://www.bookbub.com/authors/ella-fox
Facebook: https://www.facebook.com/EllaFoxAuthor
Twitter: https://twitter.com/authorellafox
Goodreads: https://www.goodreads.com/author/show/6456709.Ella_Fox
Instagram: https://instagram.com/EllaFoxAuthor
Pinterest: https://www.pinterest.com/AuthorEllaFox
Book+Main Bites: https://bookandmainbites.com/ellafox
Newsletter: http://subscribe.authorellafox.com
Rochelle Paige
Rochelle Paige absolutely adores reading—always has and always will. When she was growing up, her friends used to tease her when she would trail after them, trying to read and walk at the same time.  If she has downtime, odds are you will find her reading or writing.
She is the mother of two wonderful sons who have inspired her to chase her dream of being an author.  She wants them to learn from her that you can live your dream as long as you are willing to work for it.
When she told her mom that her new year's resolution was to self-publish a book in 2013, she pretty much told her, "About time!" ﻿﻿
Website: http://www.rochellepaige.com
Facebook: https://www.facebook.com/rochellepaigeauthor
Facebook Group: https://www.facebook.com/groups/RochellesRacyReaders
Twitter: https://twitter.com/RochellePaige1
Instagram: https://www.instagram.com/rochellepaigeauthor
Goodreads: https://www.goodreads.com/author/show/7328358.Rochelle_Paige
Amazon: https://amzn.to/2XRRB8E
Bookbub: https://www.bookbub.com/authors/rochelle-paige
Newsletter: http://eepurl.com/Ly1Tn

Vaughn is known for being unflappable but when he sees Allie he stumbles. She comes into his life like a wrecking ball. He wants her and only her. The question is will his keep his cards close to the chest personality push her away? Only one way to find out.

Allie had always thought Vaughn had been attractive but when she met him it amplified. The two together were explosive and hot. Once together they were tied to the hip until Allie has to go out of town for work. Then it goes downhill. Will the misunderstandings tear the two apart or will they be able to start a life together?

Vaughn and Allie were perfect for each other. Together they create a solid foundation for a relationship and make each other whole. Plus you get glimpses of the characters from the first book Gage and even some new ones. I cannot wait to see where Fox and Paige do next with the series.

Vaughn is book 2 in the Love Under the Lights series, we previously met Vaughn and Allie in Gage and I couldn’t wait to find out their story.

Allie just slides by behind her famous BFF and that is fine with her, when she catches Vaughn’s attention, she pretends not to know who he is; but let’s face it how can you not know who this gorgeous man is.
Vaughn has a fantastic poker face until he meets Allie, she is everything he wants but will secrets he is keeping push her away for good and destroy them??

Vaughn and Allie are explosive together, Their love is instant and the chemistry between them is off the charts and continues to grow throughout the book.

I personally really enjoyed reading this book, while this book is a standalone I recommend that you read Gage’s book beforehand. I look forward to more from this duo.