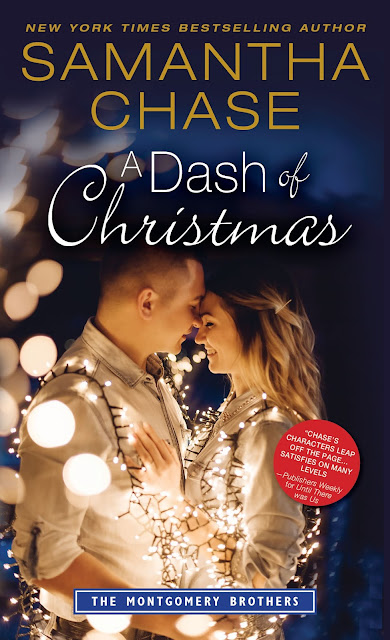 Carter Montgomery broke the family mold when he went to culinary school. Now a successful restauranteur, he’s at a crossroads: should he continue on his successful path or look for a new challenge? What he needs is time alone to think things through. But his matchmaking family has other ideas…

Emery Monaghan’s no-good fiancé has embroiled her in scandal and she needs a way out. When mentor Eliza Montgomery offers her a refuge, she’s relieved—until she realizes that the deal means rubbing elbows with Eliza’s son Carter—Emery’s childhood nemesis.

“From rivals to lovers, 5 stars”

When I sat down to read A Dash of Christmas, I was like Johnaka, why the H-E-double hockey sticks are you reading a Christmas book in September. I mean, I know I do some weird stuff but that’s a little early even for me. But then I cracked open A Dash of Christmas and realized that it wasn’t a Christmas book, but a book about getting ready for Christmas. I soon fell into the story and was smitten with these two. One thing is for sure I think if you take a chance on these two you will love it as much as I did.
Emery’s life is not what she thought it would be at this point. Her life is basically shattered around her feet and she doesn’t know how she’s going to pick up the pieces. What she didn’t expect was the help from an old acquaintance. When Carter shows up she’s ready for a fight, because that’s what they are known for. But what if they turn all that fire into something else?
Carter is tired. Opening this fourth restaurant is slowly killing him. Add in the fact his mother wants a holiday cookbook out of him. When he stumbles upon Emery he doesn’t know what to think aside from the fact he hates what she’s going through. But that annoyance he used to have towards her has shifted. Is he willing to take a chance on love and is Emery the one?
Plot-5/5
Characters-5/5
Heat-5/5
Writing- 5/5
Overall-5/5

She motioned to the table. “Let’s eat!”
He joined her and found it hard to focus on the food in front of him—he was still in awe of the transformation of the house. “I can’t believe you pulled this off.”
She smiled and picked up her burger. “I’m extremely organized and efficient. In other words, I had a plan.”
Picking up his own burger, he looked at her and saw how pleased she was, unsure if it was because of a job well-done or the greasy treat she was eating. His stomach growled, and he needed to ignore how unhealthy the meal was and just…go for it. “Well, color me impressed,” he said, referring to her, but realized it could also have meant the meal.
It was surprisingly good.
And satisfying.
When neither had spoken for several minutes because they were too busy eating, Emery leaned over and said, “Welcome to the Dark Side. We have empty calories.”
Carter almost choked on his food but managed to swallow it down before reaching for his drink. Her sense of humor was something he was finding to be utterly charming.
Add that to the list.
There was no time to dwell on it, however, because he was almost done with his burger and was seriously enjoying it.
Now that deserved some dwelling.
“Admit it,” Emery said from beside him, leaning back in her chair. “You enjoyed it.”
“Never.”
She laughed, husky and sexy, and…he seriously needed a distraction.
Reaching over, she looked in the second bag and then gave him a knowing glance. “Who are these chicken nuggets for?”
“Oh, um… I thought you might like them,” he said, not wanting to look at her. Carter busied himself with finishing his fries—which were salted to perfection.
“Hmm. I don’t know if I could eat them right now.” He heard her rummaging around in the bag again. “And what about this? Is this some sort of apple pie?”
Busted!
“Maybe.”
She laughed again—loud and hearty. “Carter Montgomery, you better admit right now that you bought all of this for you because you remember what it’s like to eat like a normal person!”
He lost the battle with his own laughter. “I will do no such thing.”
Standing, Emery took the bag with the extra food and made her way across the kitchen. “Well then, as much as I appreciate the thought, I’m way too full to eat another bite, so…I’ll just throw this out.”
“Wait…what?” he cried, coming to his feet. “Why would you do that?”
With a careless shrug, she replied, “These things never reheat well, so it’s pointless to save it. Besides, what do you care? I can give you the five bucks they cost you, if you’d like.” The bag was dangling over the trash pail, and the look on her face was full of challenge.
And amusement.
“Emery,” he began as he took a step toward her. “Just…put the bag down.”
“And nobody gets hurt?” she teased before letting out a very feminine giggle.
Deciding to stall, Carter studied her. “I just hate to see food go to waste.”
“All you have to do is admit you got it for you. Just say the words and I’ll put the food back on the table.” She shook the bag for good measure. “Come on. I dare you.”
Those were fighting words.
Before he could question it, he lunged for her and Emery let out a high-pitched squeal before taking off around the kitchen island. By their third time around, Carter caught her around the waist and spun her while she cried out, “Uncle! Uncle!” They were both laughing hysterically by the time he collapsed back in his chair with her in his lap. It took several minutes for them to calm down.
“Man, you just cannot stand to be proven wrong,” she said, but made no attempt to move from the circle of his arms.
This was dangerous territory. He knew that. It felt far too good to hold her. Turning his head, he inhaled the smell of her shampoo, daring to lean in further until his lips were touching her ear.
Softly, he murmured, “Just give me the apple pie, and nobody gets hurt.”
It was meant to be funny—a small joke to go along with all the teasing they’d been doing—but it didn’t feel so funny when Emery let out a low moan at his words.
“Make me,” she whispered, and—holy crap. It was all Carter could do not to haul her over his shoulder and take her inside to his bedroom.
Her name came out as a plea as Carter ran his tongue along the shell of her ear. Emery trembled in his arms as they tightened around her. The bag fell to the floor and she shifted ever so slightly so they were nose to nose. Then it was her turn to sigh his name. Her hand came up and cupped his cheek, and for a moment, he was afraid to move. Afraid to breathe. He didn’t want to risk doing anything to break the spell or ruin the moment.
It would kill him.
Reaching up, he mimicked her pose by cupping her cheek. He owed it to her to be honest.
“This isn’t about making either of us stop talking,” he said gruffly. “This is about me kissing you because I have to.”
Slowly, Emery licked her lips. “Good.”
It was as if everything happened in slow motion from there—like they were being drawn together by forces beyond their control, and when their lips touched, they both sighed and eased into it.
All Carter could think was how this was possibly his sweetest victory ever with Emery—knowing she wanted his kiss just as much as he needed to kiss her.
Posted by Jennifer at 8:00 AM