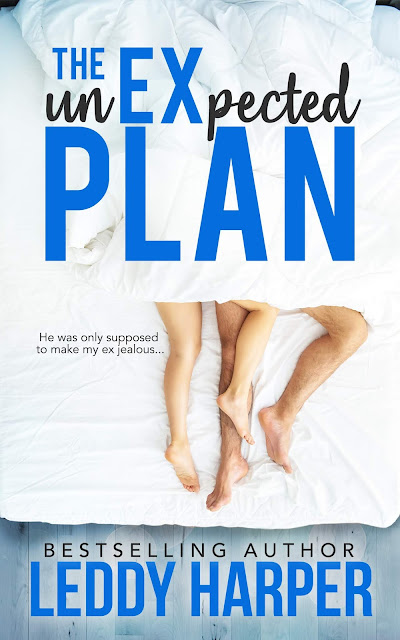 The UnEXpected plan, an all-new standalone Romance by Leddy Harper is NOW LIVE!


Synopsis:
He was only supposed to make my ex jealous...not make me fall in love with him.
When I discovered that my boyfriend had cheated on me with his assistant, and then left me for her, my friends and I devised a plan—to make him pay.
It was simple.
It was foolproof.
Or so I thought.
Corbin Fields was my best friend’s older brother; he was also part of my revenge plan. It was brilliant...until the unexpected happened.
I was supposed to be getting over my ex...
Not getting under my best friend’s brother.


Download your copy Today!
Free with Kindle Unlimited
Amazon –  mybook.to/theEXplanLeddyHarper
Add it to your TBR - http://bit.ly/unEXpectedPlan

The Unexpected Plan is a standalone revenge romance that leads to Brooklyn falling for her best friends’ brother.

Brooklyn had her life planned out, she had the perfect guy, perfect plan of how it was going to go; when she is dumped out of the he is determined to get him back. When they enlist Corbin her BFF’s brother to help her, she is all about the prize outcome. When feelings start to get mixed up and the line of friends start to disappear Brooklyn and Corbin have a different plan. But will lying to her BFF cost her a life long friendship?

I personally found this story frustrating, Brooklyn didn’t want to move on, she was obsessed; when she enlisted Corbin’s help, she sounded even more desperate which came off as a bad trait in the character. Corbin is a workaholic who is very easily lead by his sister into doing things he doesn’t want to do.

While this isn’t my favourite Harper story, I look forward to more in the future.

About Leddy Harper
Leddy Harper had to use her imagination often as a child. She grew up the only girl in a house full of boys. At the age of fourteen, she decided to use that imagination and wrote her first book, and never stopped.
She often calls writing her therapy, using it as a way to deal with issues through the eyes of her characters.
She is now a mother of three girls, leaving her husband as the only man in a house full of females.
The decision to publish her first book was made as a way of showing her children to go after whatever it is they want to. Love what you do and do it well. Most importantly Leddy wanted to teach them what it means to overcome their fears.