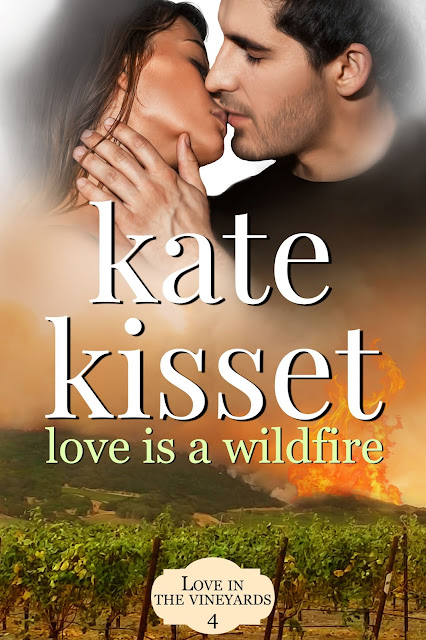 Today we have the release week blitz of Kate Kisset’s LOVE IS A WILDFIRE! I am so excited to share this new romance with you. Check it out and grab your copy today!

About Love Is A Wildfire:
This small-town romance series is set in a charming community where everyone knows each other. Although each book is a complete standalone, this is one, large saga where families and close friends are connected and reappear throughout the series. (You do not have to read the other books in the series to love this one. Each book in the series centers around a different couple.)

LOVE IS A WILDFIRE: Love in the Vineyards book #4 is a stand alone second-chance romance.

Playboy-vintner Michael Santino’s world is about to go up in flames. The largest wildfire in California history is racing straight for his precious vineyards. But the fire isn’t what’s making him hot and bothered— it’s Shae.
The beautiful firefighter he’s never forgotten is on the scene, re-igniting sparks and making it impossible for him to think straight. Now he can’t remember why he broke up with her.
Firefighter extraordinaire Shae Hayes is determined to evacuate Santino Winery.
Strong and proud, from a long line of heroes, she’s not taking no for answer—even if it is from Napa Valley’s own Mr. Charming. The devastatingly handsome sweet- talker is the only man who turns her insides to jelly.
When the wind changes and Engine 6 is stationed at Santino Winery, Shae and Michael begin to melt in close quarters, and their chemistry ignites.
Is it the firestorm outside or the flames smoldering in their hearts going up in flames?
They’ll soon have to decide if their LOVE IS A WILDFIRE.
If you like sweet and sexy, epic romances with exciting action and adventure, buy Love is a Wildfire now, the latest book in Kate’s Love in the Vineyards series!
***Early readers are calling this one of the most exciting vacation reads for women of 2018. 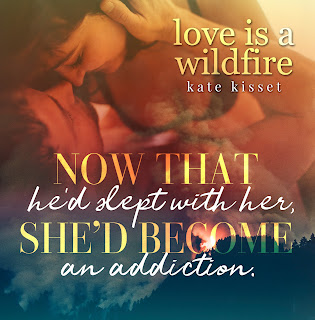 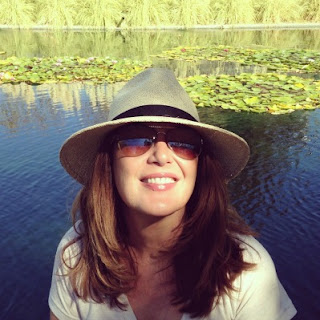 Readers call her novels, sexy, sweet and refreshing, with complex characters and plots that serve up humor without holding back on heart.

Kate divides her time between Northern and Southern California. Her stories feature strong heroes and heroines set in the small town, real-world vineyard settings found outside her front door.

When she's not writing, Kate's favorite job is being "The Mommy." She enjoys reading, binge watching Netflix and the Hallmark Channel, wine tastings, cooking, listening to music, and hiking with her loyal companion Luciana Parmigiana, her rescue-dog-editor. 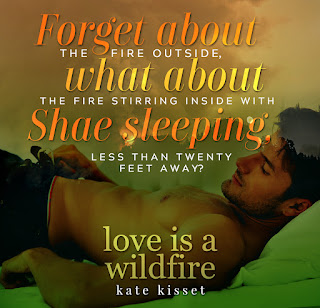 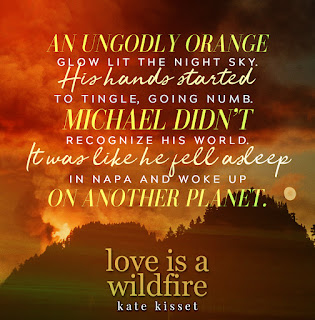 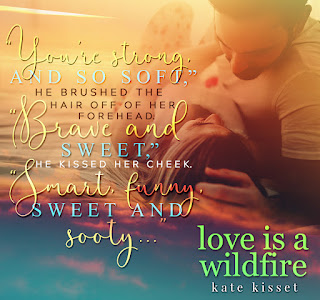 They donned their masks, and together made their way past the courtyard and up through the vineyards. Line after line of thick flames ran across the ridge, making it hard to gauge the location of the main fire.
It didn’t matter. They were all lethal. The fires closest to them were setting off new, smaller blazes while he and Leo kept trudging up to get beyond the vines.
When they reached the bottom of the ravine, Michael scouted for a path—any small break in the flames. He saw one up ahead and pointed it out, about ten yards up the mountain, to the right. “Let’s lock arms,” he shouted.
Meeting his eyes, Leo nodded, confirming he saw the clearing too.
Locking arms, they tramped up over the embers, avoiding mini blazes every five or ten steps.
Pushing the mask off his face, Leo yelled over the crackling roar, “Dad! Nico! Call out, we’re here!”
“Lucaaaa! Jamieee!” Michael pulled his mask under his chin. Gagging through the smoke, he cupped his hands over his mouth, bellowing into the abyss, “Luca! Jamie!”
When they reached the clearing, they were immediately slammed by blast of smoke that knocked them down. Struggling to get to his feet, Michael shook his head and blinked to get the ash and debris out of his eyes. Blinded in the midst of igniting branches snapping and falling around them and the low hum of the roiling fire, he rubbed his eyes, using his coat sleeve and then his hands, smearing and embedding the muck deeper into his corneas.
Putting his mask back on, Michael could barely see through his watering eyes and guck-covered mask.
The fire gave a guttural growl that drowned out Leo’s voice, but Michael saw his mouth moving. Twisting to avoid the heavy smoke, and scowling, he hollered, “Nico! Dad!”
“Luca! Jamie!” Would Michael lose all of them tonight? He didn’t have the bandwidth to even remotely consider the possibility. “Nico! Dad!”  He knew they probably couldn’t hear him over the roar, but gave it his all.
Leo and Michael thrashed their way to the end of the break, where a wall of flames confronted them. Leo brought his arm up and around, motioning over the flames. He shifted closer Michael’s ear. “We have to go through. No choice,” he yelled, barely audible over the bellowing fire and crash of falling trees and branches.
So much fuel left to burn. Michael regretted not leveling every tree and shrub and clearing the whole mountain when he had the chance. Who needed nature if it was only going to come sneaking back around one autumn to kill you?
Michael nodded to Leo, whose grimy, bloodshot expression was steely with determination. They couldn’t abandon their brothers and father up there. Leo stared back at him with a look that hit him hard—a cross between we have to do this and if we don’t make it, goodbye. 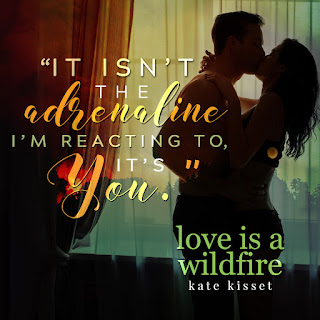