This is a prequel to the Dark Romance Standalone STALKER.

Some secrets are meant to stay hidden …

Secrets could kill you. My husband is the prime example.
I’m a trophy wife. Someone’s prized possession, just there to be pretty. My dreams were pushed aside for his. Until one fateful night, one chance encounter, all his dirty secrets were exposed.
And then my supposed husband is killed.
I should be sad, but all I feel is anger. My husband is a lying, cheating bastard. And if that isn’t bad enough, I’m now the prime suspect for his murder.
Only his brother believes I'm innocent, and in his support, I find relief. However, I will find the real killer and bring him to justice ... before he tries to end my life too.


Well that was wild, gritty, and stupidly clever.
The speed and pace of this novella prequel, is crazy. Almost too crazy, but not quite. Confused? Yep me too.
The atmosphere was dark and clever, like a huge creepy 'who done it?' style vibe.

Some secrets are meant to stay hidden …

Vanessa is the gorgeous and charming arm candy of one America's biggest and richest movie directors.
He treats her like trash, she hates the way he treats her. But she is with him, because that's the role she plays. Until she has had enough, and makes a big mistake, or was it.
Phoenix is the ultimate in mysterious, dark, deadly hot guys. He is covered in ink and piercings, and not someone you would want to bump in to, in a dark alleyway.
He has a job to do, and nothing is going to stand in his way, he will not be distracted, or make mistakes. But will he.

So it's one of those types of stories, where you can easily get confused. The time is jumping all over the place, from the present, to the past, back to a completely different time. It would be incredibly difficult to follow, if it wasn't so incredibly compelling.
We are taken through a series of events, through 2 different pov's.
We see things unfold before this pivotal night, during the night, and then afterwards.

It was almost like I needed a pen and paper to jot down key information. Where you think things are clear cut, and there is no other way around the story, little things pop out and surprise you completely.

I think what I loved most was Vanessa. She was such a surprise. I thought I had her pegged from the start, then I was completely thrown when things began to unravel. She was sharp, incredibly clever, and shrewd to the point of scary. Nobody would get the better of that woman, once she had, had enough.

Phoenix was scary, and creeped me out, but he was definitely sexy, and it was obvious that there was more to him, that you would assume.
He made a mistake by thinking he could get one-up on Vanessa that's for sure.

Okay, so this is the prequel to Stalker, and the background on what happened to both the main characters, to explain the night that had put events in motion.
Some comments were made, and I was left thinking 'WTF?' which is obviously to make me want to read Stalker, to find out more. And of course I do. I'm dying to fill in the gaps, and find out what happens next.

Considering this was a novella and a prequel, it was absolutely gripping. I couldn't put it down, and zoomed through, quite sad when it finished.
I NEED to know how?, what?, why? and all the other annoying questions.

Great start to this story. Can't wait for Stalker. I don't think it's long until that is released either!

I’ll come for you, Princess. One way or another, I’m going to get you … and when I do, be ready to run hard and fast. Because I know what you’ve done. 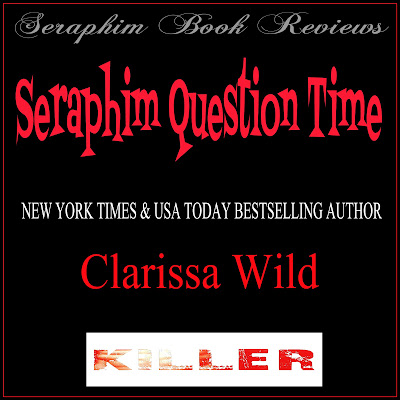 FOR SOME MORE FUN & EXCLUSIVE CONTENT FROM CLARISSA WILD....

Posted by Anonymous at 8:58 AM