Everything in Duke Grayson’s life was all he could ever ask for: A loving family, loyal friends, a beautiful girlfriend, and a scholarship to his top choice college. It’s his senior year of high school, and all he needs is to focus on his grades, lacrosse, and keeping his girlfriend happy. That is until Raya walks into his life.

From the moment they meet, Duke is drawn to her, not only for her natural beauty and her stunning crystal blue eyes, but because he’s aware there’s more to this girl than just his alluring pull to her. He senses secrecy and fear.

Throughout the year, their bond grows stronger, and his feelings for her become undeniable. Just when he is about to express his love, tragedy strikes and Raya disappears.

For six years, Duke is tortured by his struggles, as he’s unable to find her and blames himself for failing to protect her. Until the day, she’s found, and he’s given a second chance. Will Duke become her beacon of hope and make her see that it’s the little things that make life worthwhile? Can Raya overcome her fears and fight against the terrors that haunt her? Or will her dark and torturous past be too much for her to battle against?


*Warning: This book contains some disturbing situations, strong language and sexual content. Suited for 18 years and over.

At the beginning of this book I felt like it was a little juvenile.
The conversations were a little predictable for my liking.
But with every page it got better. It was almost as if Madison Street became more confident in herself as a writer.
Duke and Raya...they work! I have a soft spot for Duke, but then again what's not to love about a man who never stops searching for the one he loves?
And Raya, she's a fighter. The things that girl went through were unreal. I honestly can't imagine.
I won't lie though, I didn't like the loss of West. I wish she didn't kill him off.
I loved how Melanie and Rob helped Duke in his search for Raya. They are the very definition of true friends.
I liked the ending of the book. I am a complete sucker for a HEA.

Think back to the exact moment when you fell in love for the first time.

That split second. That precise moment.

Can you remember it?

I can remember the day as if it were yesterday: from the light blue dress she wore, to her golden locks curved along her shoulders, down to the shocking tingle when our fingers touched. It was the happiest day of my life, and yet she didn’t even know I existed.

What if you had the chance to relive those moments? Would you take it?

I’ve waited almost ten years for her and my time has finally come.
This split second, this precise moment will change her life forever.

When I saw this was Melanie's story I got really excited.
You were introduced to her in the first book in the series. She was Duke's ex girlfriend and Raya's best friend.
In Little Things you learned she was a hell of a woman, when she gave her two friends her blessing to be together.
Well in Little Moments she's all grown up and a nurse.
Roman, he is a man who knows loss. He lost his parents when he was young and was raised by his Aunt and Uncle. He grows up to become a firefighter.
These two have crossed paths several times. They met at 17 but never actually got together until they were 27. It took Roman becoming one of her patients for them to finally click into place.
They got the HEA they both deserved.
I loved catching up with the Greysons and Rob. I love how Tyler made an appearance, even though I wanted to punch him in the face. I mean seriously who holds a 10 year grudge?!
I don't know if I want Robs or Tyler's story next, but either way I can't wait.

**I was given an ARC of both of these books, in exchange for a fair and honest review.** 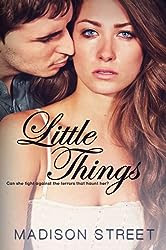 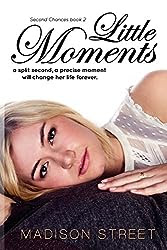 Posted by Anonymous at 4:58 AM