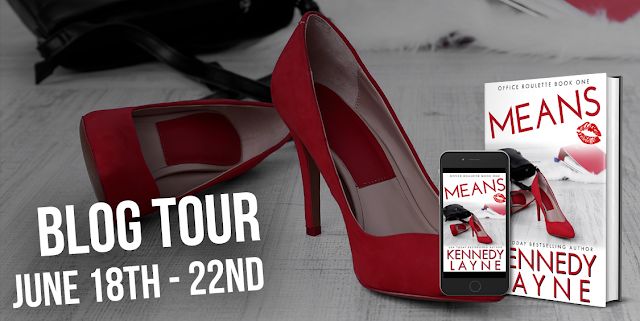 From USA Today Bestselling Author Kennedy Layne comes a sexy trilogy that involves greed, power, and the desire to do it all over again…
Smith Gallo has everything a man could ever want at the tip of his fingertips, except of course the woman he loves.  To what lengths will he be willing to go to make his ambitions come true?
Laurel Calanthe is one successful stock pick away from making partner when she finds herself in desperate need of an alibi.  There’s only one problem.  The man who can save her from being arrested is her only competitor and the one who now holds her fate in his hands.
Greed is a powerful motivator in the game of making money, but desire can overcome even the strongest motive.
Get your hands on MEANS now:
✦Amazon https://amzn.to/2JjW08T
✦iBooks https://apple.co/2Jj7XMh
✦Barnes and Noble http://bit.ly/2JdvrT2
✦Kobo http://bit.ly/2xJG4M0

Read part of the first chapter from MEANS here!

Laurel had always prided herself on maintaining her composure through thick and thin. She never allowed her emotions to conquer her will, yet here she was raising her voice and reacting recklessly to his barbed accusations. And it was all because she’d found the dead body of her boss.

Laurel unbuttoned his shirt she was wearing, albeit jerkily because of all the adrenaline coursing through her veins. She refused to stay here another minute. It was more than obvious they needed some time apart, so she’d be the smart one and simply walk away. How she managed to botch her planned exit was beyond her, but it all started when she began to verbalize her thoughts. Later, she’d realize that’s why spinsters had cats.

“I don’t need this crap.” Laurel could see she’d surprised Smith with her declaration. Well, he could join the club. She’d even managed to get stuck on the last button, causing her to take it off over her head before shoving the shirt into his chest. “I’m already going to hell. Do you know what thought first crossed my mind when I realized Brad was dead? That I wouldn’t get the partnership I’d worked my ass off for the last six years. Who does that? Someone going straight to hell, that’s who.”

“On top of that?” Laurel began walking toward the bathroom where she’d left her clothes, but she spun back around to finish the speech she should have never given breath to in the first place. “I’m sleeping with you! A man who is definitely way out of my league and a colleague with whom I should have stuck to my original answer that I gave regarding your first invitation. But I didn’t do that, did I? No, I had to have sex with you, didn’t I? Oh, and it had to be good sex. Great sex, as a matter of fact! Probably the best sex I’ve ever had, and look at me now. I’m all fucked up.”

Laurel began counting off the negatives by raising a finger for each one.

“No partnership. Our boss is dead. You had to give me an alibi for the murder that everyone is going to hear about. In fact, everyone is going to know we’re having sex by six o’clock this morning because of said alibi. We’re probably both out of a job, give or take a year or however long it’s going to take to close the funds. And… oh, yeah. I’m going to hell!”

Laurel held up a hand with all five fingers displayed, not expecting him to latch on to her wrist and yank her up against him. What air she did have left in her lungs after allowing the verbal dam to break came out in a whoosh, taking all her anger with it.

He was touching her face, making this personal. She’d always maintained her composure around him, but his easy acceptance of their affair being made public had crumbled the barriers she always had in place.
“You’re changing our rules,” Laurel whispered, tears burning the back of her eyes. She blinked furiously to get them to go away, but the gentle touch of his palm against her cheek made that impossible. “You don’t get to change the rules like that.”

“Sweetheart, I hate to break this to you,” Smith murmured, his lips barely an inch from hers. The heat coming from his body had hers responding in kind. “But I made the rules, so I can break them.”

“Romance and murder, 4 stars”
Laurel and Smith are not supposed to be together, blasted work policies prohibiting coworkers from being together! Laurel is admit its all fun and games between the two but Smith sees it as something more. He’s trying to commit and she’s sticking to her guns. Or she was until she found her Boss murdered and Smith and her relationship is brought to light. Now its game on for these two.But the question remains…who killed their boss? Everyone around them is a suspect and they don’t know who to believe. Sometimes there is a lot more going on in the office then one realizes. This story holds the right amount of romance with mystery and I can’t wait to see what Kennedy sets up for the next two stories in this series.